The Parody Wiki
Register
Don't have an account?
Sign In
Advertisement
in: Five Nights at Freddy's Characters, Characters, Female Characters,
and 23 more

Mangle is a supporting antagonist in the Five Nights at Freddy's. Mangle is one of the antagonists in the fnaf franchise, first appearing in Fnaf 2. They are a reimagined version of the original foxy, and was later repurposed after being severely damaged.

Unlike most other versions of Foxy, Mangle is meant to be a female. They are also the most damaged and irreparable verison of Foxy.

Mangle has red cheeks, as well as lipstick haphazardly dotted on their elongated snout. They also have pink eyelids and long eyelashes. Their teeth are also smaller, but their endo's teeth are also visible. A pink bow tie is also attached to their bent chassis, and their eyes also appear to be more realistic in design than the others. They also have a second head that seems completely endoskeleton in design, which bears Mangle's left eye on it. If looked at closely, it can be seen that Mangle has pink nail polish on her feet. (Source👉 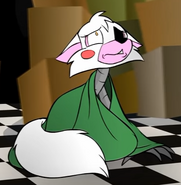 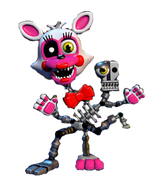 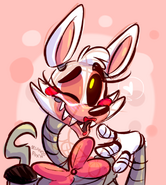