Woody Woodpecker is the star of a galactic circus, run by Mr. Swackhammer and Chief Blue Meanie. he and his friends are forced to live life as as circus freaks, hit by whips and generally mistreated. They only wish that they can be free from their dreadful, unfair lives. One night, after Woody Woodpecker has just done a great performance, the circus closes for the night and Mr. Swackhammer picks up a new circus recuit, Manic the Hedgehog. Manic is forced to stay at the circus because he can do amazing tricks. He discovers that the other performances are forced to stay in this prison despite not having done anything wrong. Manic won't take this. That night, he helps them escape. Mr. Swackhammer hires an evil evil cat/rat, Warren T. Rat, to bring the "fugitives" back. Manic leads the circus freaks outsmarting Warren T. Rat and living in the city of Aerotropolis, the populated world the traveling circus landed on. 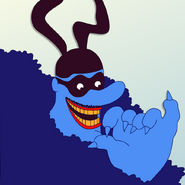 Warren T. Rat as Inspector Grub
Add a photo to this gallery
Retrieved from "https://parody.fandom.com/wiki/Manicman:_The_Animated_Series?oldid=1693185"
Community content is available under CC-BY-SA unless otherwise noted.