The mantled howler (Alouatta palliata), or golden-mantled howling monkey, is a species of howler monkey, a type of New World monkey, from Central and South America. It is one of the monkey species most often seen and heard in the wild in Central America. It takes its "mantled" name from the long guard hairs on its sides. The mantled howler is one of the largest Central American monkeys, and males can weigh up to 9.8 kg (22 lb). It is the only Central American monkey that eats large quantities of leaves; it has several adaptations to this folivorous diet. Since leaves are difficult to digest and provide less energy than most foods, the mantled howler spends the majority of each day resting and sleeping. The male mantled howler has an enlarged hyoid bone, a hollow bone near the vocal cords, which amplifies the calls made by the male, and is the reason for the name "howler". Howling allows the monkeys to locate each other without expending energy on moving or risking physical confrontation. The mantled howler lives in groups that can have over 40 members, although groups are usually smaller. Most mantled howlers of both sexes are evicted from the group they were born in upon reaching sexual maturity, resulting in most adult group members being unrelated. The most dominant male, the alpha male, gets preference for food and resting places, and mates with most of the receptive females. The mantled howler is important to the rainforest ecology as a seed disperser and germinator. Although it is affected by deforestation, it is able to adapt better than other species, due to its ability to feed on abundant leaves and its ability to live in a limited amount of space. 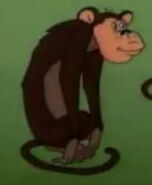