The Parody Wiki
Register
Don't have an account?
Sign In
Advertisement
in: Characters, Animals, African Animals,
and 79 more

With its huge, ungainly stature, balding pink head and enormous wedge-shaped bill, it is easy to see why many consider the marabou stork (Leptoptilos crumeniferus) to be a somewhat ‘ugly’ bird. In flight, it soars elegantly with large, dark grey wings spanning almost three metres from tip to tip, but on the ground it walks hunched on long, gangly legs. A fleshy, inflatable, pink wattle dangles conspicuously below its bill, and a white collar rings the base of its nearly featherless, pink neck. The back and tail are dark grey, like the wings, while the underparts are off-white. Although the natural colour of the legs and feet is dark grey, the build up of excrement makes them appear almost white. Unlike the adults, immature marabou storks have a woolly covering to the head, and a darker plumage. 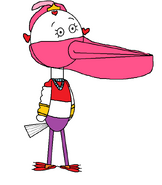 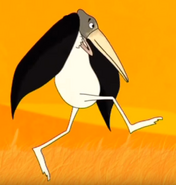