Start a Wiki
Marina is a main character in The Fresh Beat Band. She was originally played by Shayna Rose Môr in seasons 1 & 2 and was replaced by Tara Perry in 2011. The reason for Shayna Rose leaving TFBB is due to personal reasons.

Marina is an awesome drummer and the "rock steady" beat of The Fresh Beats. She brings her drumsticks with her everywhere she goes and can play any drum (or anything resembling a drum) that you put in front of her.

Marina is quite the comedian. Her favorite catchphrase is "Hip-hop and pop," which she usually says at the beginning of a rhyming sentence. Her favorite colors are turquoise and purple. She usually takes the lead to jumpstart the band's ideas. Marina also has a habit of agreeing with some of Twist's crazy ideas, saying "You know, that would be cool."

Marina has red (originally ginger in seasons one and two) hair and light skin. She wears a turquoise dress with a purple belt, dark purple leggings beneath it, and Converse sneakers. She has now buttons when Tara Perry got the role as Marina sometime in 2010. 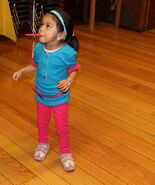 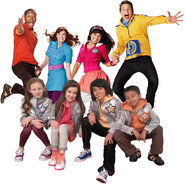 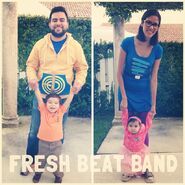 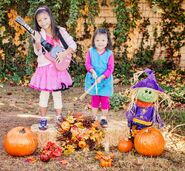 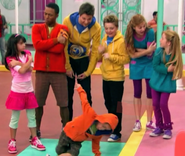 Add a photo to this gallery
Retrieved from "https://parody.fandom.com/wiki/Marina_(The_Fresh_Beat_Band)?oldid=1926098"
Community content is available under CC-BY-SA unless otherwise noted.