The Parody Wiki
Register
Don't have an account?
Sign In
Advertisement
in: Characters, Animals, South American Animals,
and 77 more

Marine iguanas (Amblyrhynchus cristatus) are the world’s only marine lizards. They inhabit the Galapagos Islands and, in the absence of mammalian predators, have adapted well to the harsh marine environment. Superficially they resemble large lizards, though they have evolved blunt noses for grazing on seaweed, laterally flattened tails to assist swimming, and powerful limbs with strong claws to help them cling to rocks. They are grey to black in colour, though during the mating season they may have blotches of coppery green and red on their scaled body which may result from the consumption of a particular seaweed that blooms in the summer months. These iguanas have obelisk-shaped dorsal scales running from the head to the tail. Males are considerably larger than females, though the sexes are similar in appearance. Juveniles also look the same, but are generally darker in colour. 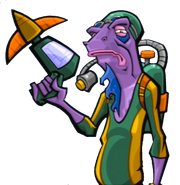