The Parody Wiki
Register
Don't have an account?
Sign In
Advertisement
in: Characters, Animals, Asian Animals,
and 37 more

With its spectacular twisting horns, the markhor (Capra falconeri) is one of the most striking of goats (Capra spp.), and owing to its size, also one of the most imposing. The colour and length of the coat varies with the seasons, with the short reddish-grey summer coat becoming longer and greyer over the cold winter months. In addition to the prominent horns, which can reach up to 1.6 metres, the stocky male has a black beard and a shaggy mane of long dark hairs that hangs down from the neck. The female is shorter, more slender, and has comparatively small horns, reaching only 25 centimetres in length. Numerous subspecies have been proposed, each principally differing in the shape of the horns, but only three are consistently recognised. 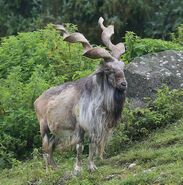 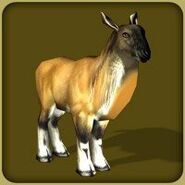 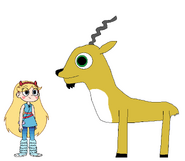 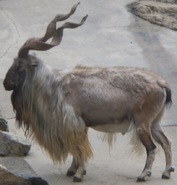 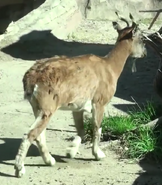