Martin Brisby is the eldest child of Mrs. Brisby from The Secret of NIMH

As in Jumanji (nikkdisneylover8390's pet style)

He is a humble thief

He is a fat mouse

He is a boy in a raccoon costume

As Pom in Bernard: The Movie, Bernard (TV series), and Bernard: King of the Mice

He is the eldest triplet

As Greg Leary in Fievel in New York

He is the oldest of Mrs. Leary's children

As Chip in Beauty and the Genie (nikkdisneylover8390 Style)

He is a teacup 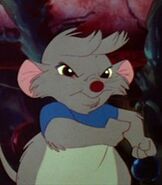 Martin Brisby in The Secret of NIMH 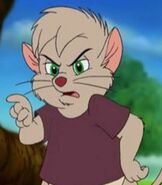 Retrieved from "https://parody.fandom.com/wiki/Martin_Brisby?oldid=2101171"
Community content is available under CC-BY-SA unless otherwise noted.