The Parody Wiki
Register
Don't have an account?
Sign In
Advertisement
in: Male Characters, Males, Character,
and 19 more

As his name implies, Master Shake is a giant white milkshake drinking cup with a pink bendy straw protruding from his head. Although Master Shake does not have a nose, arms, legs or feet, and any reproductive organs, he does have two yellow hands with only four fingers connected to each side of him. His lack of arms is shown to make picking up objects somewhat difficult. While Shake doesn't have legs, he refers to his base as his "one thick ankle" in "Kangarilla and the Magic Tarantula." Just like Meatwad and Frylock, Shake occasionally wears clothing, but does not typically wear them. Like Frylock and Meatwad, Shake has a jewel under his cup, only seen in the The Last One Forever and Ever (For Real This Time) (We Fucking Mean It)

Master Shake is incredibly selfish, narcissistic, and self serving, helping others only if doing so will benefit himself. He possesses very little empathy towards the suffering of those less fortunate, and he completely disregards the rights of others, stealing and/or destroying their property at will, such as destroying the TV on multiple occasions. In addition, he literally has the temper of a spoiled child, frequently throwing tantrums if things do not go his way. This is observed in the episode PDA, where he throws a chair out of the window and tortures Meatwad when he suspected that he had stolen his PDA.

Shake is also shown to be incredibly unintelligent and naive, and he frequently concocts asinine schemes in order to get his own way. Fortunately, these schemes rarely turn out well for him, and he often feels the painful backlash whenever his plans fail. Not only does he seem incapable of seeing the various flaws in his plans, but he also legitimately doesn't seem to be able to help prevent himself from making bad decisions. His stupidity has frequently caused much damage to the city they live in, their own house, the various people he encounters and perhaps most frequent of all, himself. Due to his massive ego and narcissism, he very often, sometimes even purposely refuses to acknowledge his mistakes.

Shake is also incredibly lazy. He is incapable of holding any sort of job (if he actually manages to find one), and depends solely on Frylock to support him, and in "The", the Aqua Teens' house rapidly falls into total disrepair without Frylock's stabilizing influence. Due to being so self absorbed, Shake is proactive about leeching off of his friends.

Oddly enough though, in several episodes such as "Circus", Shake has an unusual interest in the stock market and in "Shake Like Me", appears conscious about his 401k after being turned back to a milkshake.

Although he apparently lacks any kind of reproductive organs, Shake is actually incredibly lecherous towards women, despite being constantly rejected by them. He is also very boisterous about his sexual conquests, though Frylock points out that he lacks a penis and has never actually had sex with a woman.

He is also very disrespectful to Meatwad, constantly torturing and bullying him with cruel jokes and physical/verbal abuse.

Unlike his brothers Frylock and Meatwad, Shake does not appear to possess any kind of special or remotely useful powers. The only real power that he frequently displays is his ability to rhythmically contract his body and eject some type of thick, green fluid through his straw (which does absolutely nothing except splatter on the ground).

He also displays the odd ability to cause any object that he throws in either anger or disgust to explode in a small fireball, leaving a small crater where the object impacted (however, other characters have displayed this ability as well, meaning that this ability is not unique to Shake). Shake can also suck up water through the end of his straw, as shown in the episode, "Bus of the Undead."

On the very last episode of Aqua Teen Hunger Force Forever, Shake had the same jewel like Frylock on the bottom of him. And he was going to blast them with his eyes, but it didn't work because his jewel was dying out too.

Given his laziness and contempt for authority, most of Shake's actual paying jobs (not counting his get-rich-quick schemes that never pan out) have been forced on him by Frylock and never last very long.

The closest thing Shake has had to an actual job is likely found in the episode "Robositter," where he worked at "Slurp-a-Lunch" at the mall with Frylock as his supervisor. This job involved him turning meats, particularly ham, into smoothies. Shake quickly decided that the job was stupid and started goofing off. He even broke into a room that only managerial staff are allowed into, so he could steal and destroy the rain poncho that Frylock was working so hard for. The only other instance of Shake performing a relatively honest job was in the episode "Piranha Germs," where he was hired to spread a deadly disease.

Shake has also tried making many business deals, usually to scam others out of money. In "Dumber Days," he tried to take advantage of Meatwad's newfound intelligence by taking ten percent of Meatwad's profits by doing almost nothing. Shake also pulled a scam with Carl sometime before the events of "The Meat Zone." This involved selling a large amount of tacky merchandise to promote an oil stain on Carl's driveway that vaguely resembled Jesus. He also tried becoming a musician in "Spirit Journey Formation Anniversary," where he made a deal with Zakk Wylde to create a new birthday song to replace the old one. He pulled a similar stunt, when he tried to become a musician after Meatwad became famous in "Chicken and Beans." He also tried to patent the "Buddy Nugget" behind Frylock's back in the episode "Buddy Nugget."

He's also tried to be an assassin in both "2-And-a-Half-Star Wars Out Of Five" and "Working Stiffs." However, in the former, he tried too hard to be cool and missed every shot, and in the latter, he was too stupid to do anything right and abandoned Meatwad at the first sign of danger.

He's also tried getting into show business. He pitched Meatwad's comic book to [adult swim] in "Rocket Horse Jet Chicken," and he was an actor in "Deleted Scenes." He also stole the identities of a two famous rappers to release his own album in "A PE Christmas." He tried performing in "Antenna" and "Dummy Love." Furthermore, he had a hallucination about performing in "Hypno-Germ."

Shake has also held some miscellaneous jobs, such as being a circus freak in "Circus" or becoming a marine in "The Marines", both of which ended in failure and humiliation. He tried becoming a superhero in "Super Hero," but he did not succeed in any way, mostly because of his failed attempt to get super powers. He ruined Carl's car in a demolition derby in the episode "Kidney Car." He tried becoming a beta tester in "eDork" and "IAMAPOD". In "Last Dance for Napkin Lad," it was supposedly revealed that Shake was actually a spy, and so were Frylock and Meatwad.

Despite being roommates, Shake and Frylock are often at each other's throats. Shake will come up with some sort of ridiculous idea for his own personal gain, and Frylock will do his best to foil Shake's plans. Shake and Frylock often insult each other, sometimes face-to-face. Shake has died due to the show's lack of continuity, and Frylock has been shown not to care in most situations (with "Video Ouija" as a notable exception). While trying to work, Frylock is often annoyed by Shake's interference, such as when Shake starts about farting in "Time Machine" or trying to find a way to torture Meatwad in various episodes.

Shake is very disrespectful to Meatwad, such as abusing, bullying and taunting throughout the series. But, Meatwad likes Shake however. Since Aqua Unit Patrol Squad 1, he started treating Meatwad more respect than before. Even though Meatwad likes Shake, he admits that he dislikes Shake's tricks. Meatwad occasionally does payback to Shake such as forcing his to eat a Scorpion in Party All the Time, and having Shake get beaten up by Carl and Dante in Bookie.

It's made perfectly clear that Carl dislikes Shake the most out of all three Aqua Teens. Shake has shown endless amounts of disrespect to Carl such as sneaking in to his house, vandalizing his property and sometimes assaulting and taunting him. In the episode, Mail Order Bride, Shake and Carl had an unknown type of relation for a brief moment when they both married the same girl. In episodes like Dusty Gozongas and Jumpy George, they would fight over a woman in front of her.

Shake has appeared in almost every episode. He was absent from "Sirens", "Storage Zeebles" and "Spacecadeuce," not counting the opening sequence and closing credits. It should be noted that his voice was heard in "Robots Everywhere," but he did not physically appear.

Shake performing with his guitar. 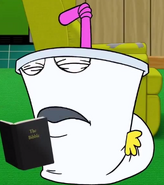 One of the few instances in which Shake kneels down. 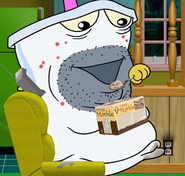 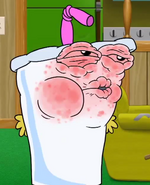 Shake suffering from an allergic reaction. 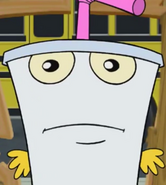 The exaggerated form of Shake's power in the season 11 intro.

Shake after being attacked by a radioactive black man