Matilda (nicknamed "Mattie" or "Mat") is one of Reader Rabbit's best friends. She is a feisty young mouse who likes to do everything. She wears a yellow shirt, a blue dress with white buttons and a blue ribbon on her tail (only from 1989–1994). Mattie makes plenty of jokes!

As a main character in Reader Rabbit Kindergarten, she finds some things that Spike is stealing. In Reader Rabbit Toddler, she visits Reader Rabbit and goes into a book which has many fun activities to select.

In Reader Rabbit: Learn to Read With Phonics Preschool & Kindergarten, Mattie goes to a fun fair but can't read any of the signs. Angry and annoyed, when she comes across a wish machine she wishes that there are no more words in all of Wordville. The next morning she realizes her mistake and tries to reverse the spell, but is unable to because the wish machine is taken away by some monkeys. The wish machine, before leaving, gives her a piece of paper with a secret message she has to fill by finding all the letters. She sits on a stage, really sad about what she has done, and confused about how to find the letters, until some hamsters offer to help her with getting the words back. She is delighted and gets the words back in due time by filling in the secret message with the help of the player, the hamsters and Reader Rabbit.

She also appears in Interactive Math Journey accompanying Tally Cat as her best friend and also stars in the video series Read Now!.

Matilda is naive, feisty and fun loving. Despite that, she is willing to help her friends whenever they need her. She is also very generous and kind-hearted.

She doesn't like being teased and gets really grumpy if anyone does so. If she gets told off, she gets upset. She sometimes makes bad decisions that have a massive effect and feels guilty afterwards. 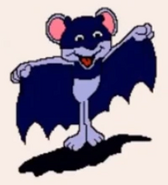 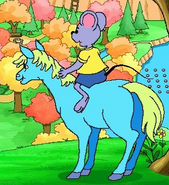 Retrieved from "https://parody.fandom.com/wiki/Mat_the_Mouse?oldid=2573317"
Community content is available under CC-BY-SA unless otherwise noted.