The Parody Wiki
Register
Don't have an account?
Sign In
Advertisement
in: Characters, Main Characters, Rabbits,
and 62 more

Max is a cheerful and playful 4 year old that likes to play with Ruby, as the protagonist of Max and Ruby. His ideas may be bad at first, but turn out good in the end.

Max has appeared in every book and episode of Max & Ruby Adventures. His first appearance in any media was in the series of books. His first appearance in television was in the Season 1 episode w. Max's first appearance was in 1979 in the first Max And Ruby book published by Rosemary Wells. It was called Max's First Word, he likes The Wonder Pets. He has a red elephant and drives around a little red toy car Max usually spoke in one word and was hard to communicate with but In season 6 Max Is old, and bigger enough to go to preschool and changes his style from blue overalls to a white shirt with red strips and blue jeans Max always spoke in one word But in season 6 he starts speaking in full sentences and could communicate better He also is smart and able to read and usually outsmarts his big sister ruby. 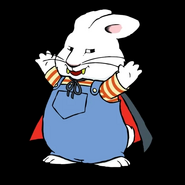