Metridiochoerus is an extinct genus in the pig family indigenous to the Pliocene and Pleistocene epochs of Africa. It is also known as the giant warthog. Metridiochoerus was a large animal, 1.5 metres (4.9 ft) in length, resembling a giant warthog. It had two large pairs of tusks which were pointed sideways and curved upwards. Based on the complicated, knobbly pattern of the creature's molars, Metridiochoerus is considered to have been an omnivore. 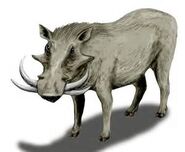 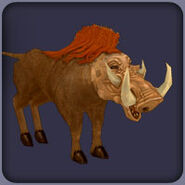 Add a photo to this gallery
Retrieved from "https://parody.fandom.com/wiki/Metridiochoerus?oldid=2525333"
Community content is available under CC-BY-SA unless otherwise noted.