The Parody Wiki
Register
Don't have an account?
Sign In
Advertisement
in: Characters, Animals, Extinct Animals,
and 13 more

Microceratus (meaning "small-horned") is a genus of small ceratopsian dinosaur that lived in the Cretaceous period in Asia. It walked on two legs, had short front arms, a characteristic ceratopsian frill and beak-like mouth, and was maybe 60 cm./2 ft. long. It was one of the first ceratopsians, or horned dinosaurs, along with Psittacosaurus in Mongolia.

The type species, "Microceratops" gobiensis, was first described by Bohlin in 1953. However, the generic name was already preoccupied by an ichneumon wasp (subfamily Gelinae) with the same name. Though much of the material has since been reassigned to the genus Graciliceratops, a replacement name Microceratus was created by Mateus in 2008 for the type specimen. 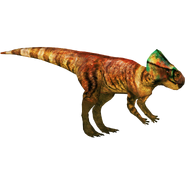 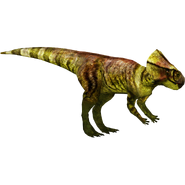