The Parody Wiki
Register
Don't have an account?
Sign In
Advertisement
in: Pets, Animals, Characters,
and 12 more

Mikku and Chikku are the two little mongoose pets of Mira.

Mikku and Chikku are loyal pets to Mira and serve as the comic relief in the group. They also really love eating food. They are also very much determined to make Mira very proud of them; given the chance.

He is a tad bit arrogant sometimes, but thinks something through before doing something most of the time. He always corrects Chikku (and says "Mikku and Chikku") whenever Chikku says "Chikku and Mikku". He's also very sweet most of the time, and, like his brother loves to solve mysteries with Mira. When Dimple shows Mira, and the two her new toy Baduk (The Mikku Mystery), he develops a fear for Baduk, whenever it jumps.

Mikku is a tan colored mongoose with red glasses and mint eyes. He is the tallest among the duo.

Chikku is a bluish-grey blue mongoose with brown eyes. He's much more chubbier than his brother, Mikku. 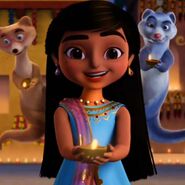