The Parody Wiki
Register
Don't have an account?
Sign In
Advertisement
in: Males, Male Characters, Characters,
and 89 more

Miles "Tails" Prower is a fox from Sonic the Hedgehog.

He played Taran in The Black Cauldron (PrinceBalto Style)

He is a young warrior

He is a talking Donkey

He played James (Animated) in Coop and the Giant Peach

He is a puppy

He played Flounder in The Little Merfox

He is Wendy's brother

He played The Fox in Alice Poppins

He is a fox with an Irish accent

He is a lost boy

He played Dash Parr in The Incredibles (Youknowwhatmoviesucks Animal Style)

He played Duck the Great Western Engine in Sora and Friends

He is a Great Western Engine

He played Young Bambi in Tailsambi

He played Young Flower in Eeyoreambi and Eeyoreambi 2: Eeyore and Spyro the Dragon

He is a skunk

He is a sick mouse

He played Edgar in Once Upon a Farthing Wood

He is a mole

He played Samwise Gamgee in The Mobius Lord Of The Rings

He is a hobbit

He is Aladdin's monkey

He played Quasimodo in The Tails of Notre Dame

He is a hunchback

He played Pinocchio in Charlie (Shrek)

He is a wooden puppet

He is a sponge

He played Koda in Brother Hedgehog

He is a bear cub

He is a chihuahua

He played Dan in Tails Vs.

He is the youngest little pig who built his house of bricks.

He played Elmo in Sesame Street (HundleyMeyerClassics Style), Tailspalooza (Elmopalooza) and The Adventures of Tails in Grouchland

He is a red monster

He played Littlefoot in The Land Before Time (HundleysOnABirdDiet Style)

He played Bruno as Footman in Pennyrella

He is the footman form of Cinderella's dog

He Played Izzy As Puppymon

He appeared in The Secret Origins of Tails

He is a son of Bodi and Darma, grandson of Khampa, Khari, Nick Wilde and Judy Hopps and adoptive brother of Sonic the Hedgehog. When the Gray Ranger tells Tails where he comes from. He decided to go home to reunite his family while Sonic and his Friends will go with him. Tails protect the tribe of Mer-Animal Kingdom, Snow Mountain and Earth.

He played Baby Jesus in The Star (Kenzcoolz style)

He is a newborn son of God

Tails and his parents; Foxy and Mangle

Tails is kidnapped by Black Manta

Tails is adopted by Sonic as his best friend.

Tails is now the Mer-Son of Bodi and Darma

When he looks at himself as a Mer-Fox

Tails as Winnie the Pooh

Tails Gets Sucked in a Honey Pot

Tails in Tails gets Trolled 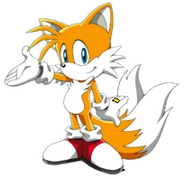 Tails tries to save Penny