Milli (born January 9, 2004) is a character of Team Umizoomi. She can make pattern with her dress, make her ponytails grow and she can also fly.

She is a purple backpack 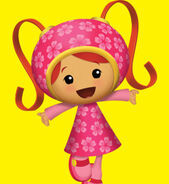 Add a photo to this gallery
Retrieved from "https://parody.fandom.com/wiki/Milli?oldid=1691778"
Community content is available under CC-BY-SA unless otherwise noted.