The Parody Wiki
Register
Don't have an account?
Sign In
Advertisement
in: Characters, Turning Red Characters, Female Characters,
and 22 more

"On the next red moon, you'll undergo a ritual that will seal your red panda spirit into one of these. And then, you'll be cured for good. Just like me. But any strong emotion will release the panda. And the more you release it, the more difficult the ritual will be. There is a darkness to the panda, Mei Mei. You only have one chance to banish it and you cannot fail. Otherwise, you will never be free."
―Ming to Mei about the ritual

Ming Lee is the deuteragonist and villain (formerly) of Disney/Pixar's upcoming 2022 animated feature film, Turning Red. She is Mei's mother who is aware of her daughter's weird abilities.

Ming is described to be a proud, devoted mother and wife. She is a hard worker who can come off as crazy or intense, but it all comes from a place of love. Ming is also overbearing towards other people, even strangers, and is not afraid to hurt them.

Ming has a complex relationship with her daughter, Meilin (Mei). She is an overbearing mother who relies on Mei to be her perfect, dutiful daughter. The two of them do nearly everything together, such as maintain the family temple, and get along like friends. However, as Mei transitions into a teenager and begins to develop new interests, such as a crush or the boy band 4★Town, Ming fiercely disapproves of these changes. Ming is also not a fan of Miriam, Mei's friend, as she believes her to be a bad influence on her daughter.

After Mei's red panda powers activate, Ming becomes very observant of Mei's life, like a helicopter parent, as she begins openly watching her at school. Ming is adamant that Mei find a way keep her emotions, and therefore her panda form, in check. However, she only does so out of a legitimate concern that her daughter's powers may get out of control and cause her or others to get hurt.

Ming's anxieties and flaws stem from when she went through the Red Panda transformation herself, along with the overbearing demands from her own mother, Wu, that she be the perfect daughter. It reached a boiling point when Ming and Wu got into an argument regarding Jin, whom Wu did not approve of. Ming reached her breaking point and unleashed her panda, causing her to hurt her mother (and presumably leave the scar on Wu's brow), which left an emotional scar in Ming that she never truly got over, and the incident caused a divide between them ever since.

Not wanting the same thing to happen to her own daughter, Mei, Ming unintentionally made the same mistakes in raising Mei to be perfect, just as she had been, and kept Mei close, watching her like a hawk for any signs of when Mei would go through the Red Panda transformation as well (but didn't say or do anything to actually prepare Mei for the eventuality). Ming had a problem in assuming the worst in certain situations and not listening to Mei, such as when she saw Mei's drawings regarding her crush on Devon and confronted him with accusations and publically humilated her daughter, all the while ignoring Mei's protests and pleas. Furthermore, Ming continued to view Mei as the "perfect daughter" she had loved and raised, but unintentionally disregarded the fact that Mei is growing up and would become her own person and would not remain "perfect little Mei Mei" (which caused Mei anxieties and insecurities around her mother that she couldn't be herself around Ming or even express her personal interests because she knew Ming would not approve of them).

When Ming discovered that Mei and her friends were using the Panda blessing to make money, Ming immediately assumed Mei's friends had pushed her into it (when really it was Mei's idea) and seeing Mei almost hurt Tyler in a fit of rage was the final straw, as she pressured Mei to go through the ritual to bind her panda spirit. However, when Mei refused, deciding she wanted to keep her Panda, and ran off to the concert, Ming was pushed to her breaking point yet again (along with her talisman) as her mother and relatives blamed and berated her for Mei's behavior and decision to keep the Panda. Ming, still unable to see her faults, blamed Mei rather than herself as she unleashed her panda and sought her out. Filled with a rage after Mei confessed she lied, that she was sick and tired of being "perfect little Mei Mei", Ming angrily scolded Mei, accusing her of betraying her family's wishes and traditions while she (Ming) had only ever tried to be a good daughter (to her own mother, Wu).

In the celestial plane, Mei comes across a teenaged, distraught Ming, showing Mei that Ming had carried the guilt and pain of hurting her mother and the frustration and self-deprecation that she (Ming) would never be good enough for her mother or anyone else. Mei consoled Ming, assuring her that though it may feel that way a lot of times it wasn't true. After finding their relatives in the celestial plane, Ming apologized to her mother while Wu assured her daughter that she did not have to apologize because she (Wu) is Ming's mother (and loves her unconditionally), and while she and their relatives chose to seal their panda spirits again, Mei stood by her decision to keep hers and Ming accepted that, as she finally understood that her daughter is growing up and on the journey of becoming her own person. Though they both feared of how that might divide them they found mutual assurance that their love and bond as mother and daughter would keep them connected, and indeed their bond only grew stronger afterwards.

Ming found peace, within herself, with her daughter, and even with Mei's friends that she warmed up to them and began inviting them over to their home for dinner, much to their appreciation for Jin's cooking. Ming is also shown to have taken full responsibility for her behavior and humbly accepted the consequences like the good, honorable woman she is. It is shown when she and the family are helping to raise money to repair the SkyDome she nearly destroyed while it's also helping her pay her debt to society. Ming also began trusting Mei more and letting her be herself rather than the perfect daughter she originally saw her as, and though they missed how things used to be they were happier and closer than they were before.

Ming is an average height, adult, Asian woman with light skin, brown eyes, a mole under her left eye, and long hair that is tied into a bun at the lower back. She wears a blue and green, wrapped dress with a green blazer, tights, and green heels. She also has other accessories like green orb earrings, a red moon talisman, an auburn handbag, and sunglasses she wears whenever it's appropriate.

As a red panda, Ming resembles her daughter with a few key differences. She is much larger than Mei, along with having longer, shaggier fur, and a thick curl of "hair" on her head between her ears. Her facial features remain mostly the same, retaining her eyeliner and mole. 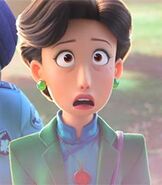 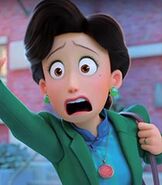 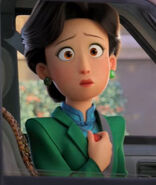 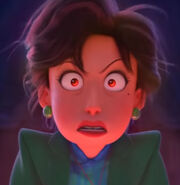 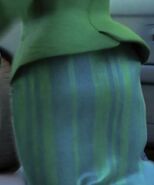