The Misaki (御崎馬/岬馬 Misaki uma) is a critically-endangered Japanese breed of small horse. It is one of eight Japanese native horse breeds, and lives as a feral horse in a natural setting in a designated National Monument on Cape Toi (also known as Toimisaki) within the municipal boundaries of Kushima at the south end of Miyazaki Prefecture on the island of Kyūshū. The Misaki was made a Japanese National Natural Treasure in 1953. 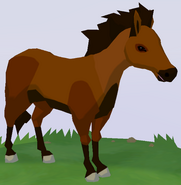 Add a photo to this gallery
Retrieved from "https://parody.fandom.com/wiki/Misaki_Horse?oldid=2433734"
Community content is available under CC-BY-SA unless otherwise noted.