The Parody Wiki
Register
Don't have an account?
Sign In
Advertisement
in: The Great Mouse Detective Characters, Beautiful Characters, Singing characters,
and 14 more

Miss Kitty Mouse is a very attractive, unbearably beautiful and insanely white mouse who has a brief but memorable role in The Great Mouse Detective. She is voiced by musician Melissa Manchester.

Role in the film

Miss Kitty is brought on by the Rat Trap's pianist to calm the crowd with her song "Let Me Be Good To You" when they prepare to riot. She starts off by singing softly, calming then, and even Dawson is attracted by her act. Only Basil pays no attention as he sees the bartender drugging his and Dawson's drinks.

Miss Kitty's song rapidly degenerates into a burlesque act with backup dancers while patrons grab fruitlessly at her. She never misses a step, kicking a couple of patrons off stage. Dawson, in a drugged state, has wound up on stage dancing with the backup dancers, much to Basil's disgust, before passing out as they look on horrified, and breaking the pianist's piano just as the song ends.

This results in a typical riot breaking out, with shots fired and some swinging on chandeliers. Fortunately, our heroes avoid swinging fists or flying chairs, and slip out unnoticed through a trap door.

She will play Minerva Mink in an upcoming Animaniacs parody

She will play Lady Kluck in an upcoming Robin Hood parody 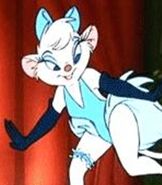