The Montezuma oropendola (Psarocolius montezuma) is a New World tropical icterid bird. It is a resident breeder in the Caribbean coastal lowlands from southeastern Mexico to central Panama, but is absent from El Salvador and southern Guatemala. It also occurs on the Pacific slope of Nicaragua and Honduras and northwestern Costa Rica. It is among the oropendola species sometimes separated in the genus Gymnostinops. The English and scientific names of this species commemorate the Aztec emperor Moctezuma II. The sexes are very different in size; the male is 50 cm (20 in) long and weighs 520 g (18 oz); the smaller female is 38 cm (15 in) long and weighs 230 g (8.1 oz). In total body mass, the males are 100% bigger than the females, which is a 2:1 body:mass ratio and makes the Montezuma oropendola one of the most sexual-dimorphic birds in the world. Webster et al. says that the size difference in males and females is probably directly related to differences in foraging habits. The females often forage on thin branches, eating insects out of curled up leaves, while the males often perch on thick branches and forage in epiphytes and bromeliads. Webster et al. also found that sexual dimorphism was more obvious in length of the wing and body mass. Male size and body mass is associated with sexual fitness and dominance. Webster et al. observed that males defend sexually-receptive females, suggesting that Montezuma oropendolas have a female-defence mating system. While the females nest, the males fight and fend off one another, and the males were ranked depending on the outcome of each fight. The alpha male eventually pushes out all other males until he is the only one left. When the alpha males leave the others come back and defend females until he returns. This type of mating system is similar to that of polygynous mammals, not birds. 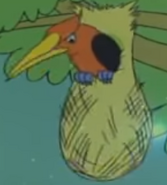