The Parody Wiki
Register
Don't have an account?
Sign In
Advertisement
in: Characters, Animals, Ocean Animals,
and 42 more

The Moorish idol (Zanclus cornutus), is a marine fish species, the sole extant representative of the family Zanclidae in order Perciformes. A common inhabitant of tropical to subtropical reefs and lagoons, the Moorish idol is notable for its wide distribution throughout the Indo-Pacific. A number of butterflyfishes (genus Heniochus) closely resemble the Moorish idol. It is closely related to, if not a direct descendant of, the extinct Eozanclus brevirostris, from the Middle Eocene of Monte Bolca. The Moorish idol got its name from the Moors of Africa, who purportedly believed the fish to be a bringer of happiness. Moorish idols are also a coveted aquarium fish but, despite their abundance and wide array of habitats, they are notoriously finicky and hard to adjust to captivity. Their omnivorous diet can be extremely difficult to replicate in aquaria, as the vegetation which they live on is normally exterminated and they have a habit of eating corals and sponges. 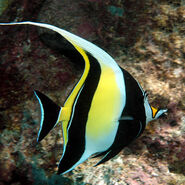 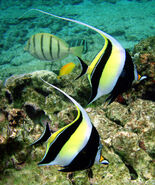 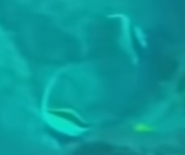 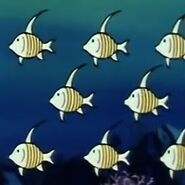 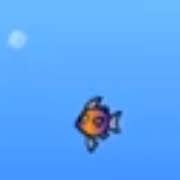 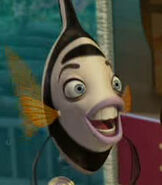 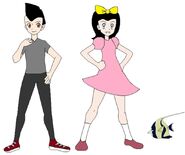