The Mosbach Lion (Panthera spelaea fossilis), also known as the Early Middle Pleistocene European cave lion, is an extinct feline of the Pleistocene epoch. It is generally considered to be an early subspecies of the lion (Panthera leo). With a maximum head and body length of 2.4 metres (7.9 feet), which is about 0.5 metres (1.6 feet) longer than today's African lions, Panthera leo fossilis was almost as big as the American lion from the Upper Pleistocene. Many bone-fragments of this cat are known from Mosbach in Germany, a small village, which is now included in the town of Wiesbaden. A nearly complete skull was found at Mauer, near Heidelberg (Germany). In the same sediment as the lion-skull was a 550,000-year-old lower jaw from the early hominid Homo heidelbergensis. The oldest records of Panthera leo fossilis in Europe are from Isernia at Italy and are about 700,000 years old. A 1.75-million-year-old lion-jaw from Olduvai in Kenya shows a striking similarity to those of Europe. From Panthera leo fossilis derived the Upper Pleistocene European cave lion (Panthera leo spelaea), which is recorded for the first time about 300,000 years ago. 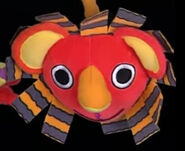