Moschops is a rare example of one of the few early mammal like reptiles that the general public are actually be aware of. This is in part due to its inclusion into most books about ancient animals, although a few people may actually remember watching the kids TV series ‘Moschops’ from the early 1980‘s.

At five meters Moschops was one of the largest herbivores of its day with only Jonkeria being a potential size rival. However it is not this large size that is the claim to fame for Moschops but its skull. The upper bone in the skull of Moschops was roughly ten centimetres thick, thicker than any other of the known animals of its day. One theory for this skull thickness is that Moschops took part in head butting, dominance contests. This does not mean that Moschops charged at one another, they most likely just walked up to face one another and then pushed with their heads.

Further support for the above theory comes from the overall morphology of the Moschops skeleton. The forelegs of Moschops carried the body higher than the rear limbs resulting in a sloping back. This would mean that a large proportion of the body mass was carried on the fore quarters and reinforced by the rear. This build probably means that dominance contests in Moschops were about projecting body weight forwards, possibly like sumo wrestlers do today in their matches.

This build however also means that Moschops was not a runner, and could not rely upon either speed or agility to escape predators. Still, a fully grown Moschops would have been nearly twice as big as most of the known South African predators of the mid Permian, with the exceptions of Anteosaurus and possibly Jonkeria. It could quite easily be that only the sick, injured or juvenile Moschops that were not fully grown had reason to fear predators. Also the idea of dominance displays in Moschops is also indicative of social interaction between individuals. As such Moschops may have moved in small groups or even herds with the dominance contests being for mating rights within the herd. 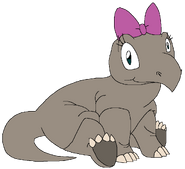 Add a photo to this gallery
Retrieved from "https://parody.fandom.com/wiki/Moschops?oldid=2105711"
Community content is available under CC-BY-SA unless otherwise noted.