The Parody Wiki
Register
Don't have an account?
Sign In
Advertisement
in: Characters, Animals, European Animals,
and 17 more

The males of this exceedingly wary wild sheep (Ovis gmelini) have large sickle-shaped horns, which are prized by many a trophy hunter. For most subspecies, females also have horns, but they are much smaller than the horns of the males. In a few populations, most or all females do not grow horns. The different subspeciesvary slightly in overall appearance; colour also varies with season and between males and females. The face is generally greyish with a white muzzle, nostrils and inside of the ears. The legs are long and slender with a vertical black line below the knees. Mouflon have a white belly and a coat that varies in colour from grey with a reddish tinge to brown and coffee coloured, while male European mouflon (O. g. musimon) are dark chestnut and females are beige. The adult rams tend to develop a substantial chest ruff of long, coarse hair, which tends to be white in the throat region, turning to black as it extends down to the forelegs. In most of the mouflon subspecies the males also have a lighter coloured saddle patch, which develops and increases in size as they get older and a black stripe, which begins midway along the nape of the neck and along the shoulders before continuing under the body, ending behind the back legs. Mouflon have large glands beneath the eye, which often exudes a sticky substance that mats the hair. 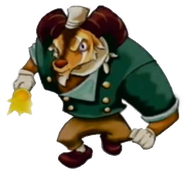