The Parody Wiki
Register
Don't have an account?
Sign In
Advertisement
in: Characters, Animals, North American Animals,
and 12 more

The mountain cottontail or Nuttall's cottontail (Sylvilagus nuttallii) is a species of mammal in the family Leporidae. It is found in Canada and the United States. The mountain cottontail is a small rabbit but its size is relatively large for the genus. Hind legs are long; the feet are densely covered with long hair. Ears are short rounded at the tips and relatively short; the inner surfaces are noticeably haired. It has pale brown fur on the back, a distinct pale brown nape on the back of the head, black-tipped ears, a white grey tail, and a white underside. A smaller size, the brown nape on the back of the head distinguish this cottontail from the Snowshoe Hare. This species is confined to the inter mountain area of North America. It ranges from just above the Canada–US border south to Arizona and New Mexico, and from the foothills of the eastern slopes of the Rocky Mountains and west to the eastern slopes of the Cascade-Sierra Nevada Range. 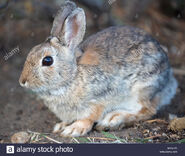 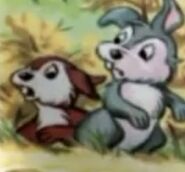