The Parody Wiki
Register
Don't have an account?
Sign In
Advertisement
in: Badgers, Cranky characters, Grumpy Characters,
and 18 more

Mr. Digger is a minor antagonist from The Fox and the Hound. He is a cranky badger who hates Tod and the Porcupine.

The Fox and the Hound

He is first seen when Tod is trying to find a den in the forest. Tod goes into a den that he thinks is empty until crazy old badger comes and starts yelling at him. Tod tries to explain that he thought the den was empty, but the badger doesn't listen or believe him, and tells Tod to leave.

The badger is seen again when Tod accidentally lands on his den when he is poked by the porcupine. The badger loses his temper and starts yelling at him more than before. Upon learning that Tod is new to the forest (and not knowing that Amos Slade is hunting Tod), the Porcupine asks him that it was just an accidents, The badger told porcupine to stay out of it, porcupine asks him to stop being so cranky, the badger orders Tod to go back where he came from, instead of taking Tod under his wing and imparting little words of wisdom. The Badger is next seen watching in interesting as Tod and Vixey confirm their love for each other. The Badger is not seen throughout the rest of the film after this.

The badger might seem like an antagonist, but is shown to behave like a typical cranky recluse (namely, the kind that doesn't like it when others - in their words - trespass into their territory, whether intentional or not).

Mr. Digger played Beast's Dark Shadow in SpongeSailor Moon: Homer the Unfriendly Ghost and Goddess and the Skunk (AKA Beauty and the Beast)

He is a bad tempered beast

He is a one of Lord Business's minions

He is an cranky badger
Mr. Digger with Flower the Skunk.jpg
Flower as Beast and Mr. Digger as Beast's Dark Shadows
Mr. Digger gets mad as he told Tod to go on beat it.jpg
"Oh! Why, you. little!" 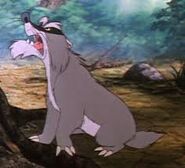