Mr. Smee is the secondary antagonist from Peter Pan.

Mr. Smee played LeFou in Beauty and the Sea Monster

He is a fat cowboy

Mr. Smee played One Of The Willie Brothers Along With Lefou and Lawrence in Home on the Mythical Land

Mr. Smee played the Doorman in The Wizard of Oz (Uranimated18 Style) 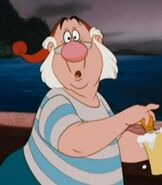 Retrieved from "https://parody.fandom.com/wiki/Mr._Smee?oldid=2154883"
Community content is available under CC-BY-SA unless otherwise noted.