The Parody Wiki
Register
Don't have an account?
Sign In
Advertisement
in: Characters, Animals, Adoptive Kids,
and 12 more 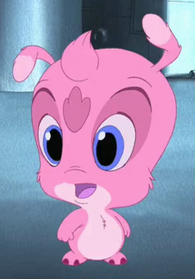 Mr. Stenchy (William Robinson 'Willy' McSkunkey), A.K.A. Experiment 254, is an illegal genetic experiment created by Jumba Jookiba and a character in the Lilo & Stitch franchise. He is designed to use his charm to get the enemy to take him back to their headquarters, where, 48 hours after his activation, he emits a foul odor that makes the location inhospitable. His one true place is on Plorgonar (Pleakley's home planet), where, unlike Earth, his stench is considered a rare and valuable perfume. He is also the sixth adopted kid on the team and Phineas and Smelly's adopted son.

Due to his disarming cuteness, Mr. Stenchy gains very much attention from humans and even certain alien species, but not so much from other experiments. He also appears to act as cute as he looks, being very loving and friendly towards anyone who gives him affection.

Mr. Stenchy is a small, irresistibly cute light pink experiment with a big head with big blue eyes, two puffy antennae, a small tuft of hair and a small body.

Mr. Stenchy appears disarmingly cute to everyone except other experiments, but then emits an extremely noxious, foul odor 48 hours after he is activated, which makes 40 square miles of an area uninhabitable for decades.

Experiment 254 was the 254th genetic experiment created by Jumba with Hämsterviel's funding. He was designed to use his cuteness to smitten Jumba's enemies into taking him back to their headquarters, where 254 would emit a noxious odor that would make 40 square miles of the area uninhabitable for decades. 254 and the other first 624 experiments were deactivated and smuggled to Earth by Jumba during his mission to capture Experiment 626.

All of the experiment pods were released and scattered across the island of Kauai.

At an unknown point after this, Experiment 254 was activated.

An estimated 12 hours after his activation, 254 was captured by Lilo and Stitch and taken back to the house, but not before being pursued by a persistent Gantu.

Lilo fell for 254's cuteness and decided to keep the newly-christened Mr. Stenchy, despite Jumba's warnings of the experiment's inevitable stench that he'd eventually unleash. Stitch, however, became jealous of Mr. Stenchy and was immune to the latter's charm. He even relentlessly bullied and tormented Mr. Stenchy.

Later, Lilo began taking Mr. Stenchy to Mertle's tea parties in an attempt for the former to be accepted into their group. Of course, Mertle and the hula girls had also fallen for Mr. Stenchy's charm after Lilo first introduced him to them.

When Stitch was left home alone with Mr. Stenchy, the latter made a vain attempt to befriend Stitch, not wanting them to be enemies. However, Stitch ignored Mr. Stenchy's efforts and ended up locking the pint-sized experiment in the pantry. Gantu later attacked the house, but Stitch, having two shoulder devils, goaded Gantu into taking Mr. Stenchy so that the former would be rid of them both.

However, back at his ship, Gantu also fell for Mr. Stenchy's charm before he could teleport the latter to Hämsterviel. This made Experiment 625 envious like Stitch, though Gantu took little notice and kept pampering Mr. Stenchy.

Thus, Gantu grew attached to Mr. Stenchy until Lilo, Stitch, Jumba and Pleakley broke into the ship to save Stitch's cousin. Due to Stitch abandoning him, Mr. Stenchy chose Gantu. However, the diminutive experiment then began to emit his stink, forcing Gantu to hand the former over. Although Mr. Stenchy reeked, it didn't faze Pleakley at all.

After being rescued, Mr. Stenchy was sent to Plorgonar in a rocket, where he could be loved in spite of his malodorous smell, as it was considered appealing on Pleakley's home planet.

Mr. Stenchy inexplicably reappeared back on Earth and not producing his deadly stink, suggesting it wears off after a while.

Later, the first 624 experiments, including Mr. Stenchy, were rounded up by Leroy and taken to a stadium to be destroyed. However, Lilo, Stitch, Jumba, Pleakley, Reuben and Gantu arrived before the experiments could be destroyed.

Mr. Stenchy participated in the following battle between the experiments and the Leroy clones, as in one scene, Mr. Stenchy can be seen around some of the Leroys just before they started to shut down.

The Leroys soon gained the upper hand in the battle, but were defeated when Lilo, Stitch, Reuben and several other experiments performed the song "Aloha ʻOe", which caused the Leroy army to shut down due to the original Leroy's fail-safe.

Mr. Stenchy appeared twice in the Stitch! anime. He was first seen when he fell in love with Skunkuna, and again later on when Hämsterviel made numerous clones of him and Mrs. Sickly as Christmas toys. It is revealed that if Mr. Stenchy's sour emissions intermix with Mrs. Sickly’s nauseatingly sweet emissions, the chemical reaction will cause a cataclysmic explosion capable of destroying the planetary body they inhabit.