Mrs. Geef, also known as Mrs. Goof, was the wife of Goofy and mother of Max Goof. She was voiced by June Foray.

While her face was hidden from the viewers, her red hair was shown and her voice was heard. She appears to be slender and rather tall, with light fair skin similar to Goofy's muzzle where the whiskers extend outward. Not much is known about her, except for the fact that she was nearly as goofy as her husband Goofy and known for her undesirable driving skills.

There is a widespread misconception that the television series Goof Troop once declared her to have passed away through unknown circumstances prior to that series' beginning, with Goofy supposedly telling Max that she's "up there with the stars" or "up there amongst the stars." However, this statement was never given in any episode of Goof Troop, as Max's mother was never once mentioned in the show. Officially, when asked about the subject of Max's mother, Disney's Guest Services once declared there to be "no definitive answer" as to "who Max's mother is and where "Mrs. Goofy" went".

Both Glory-Bee and Penny Pooch are candidates for the mysterious Mrs. Geef. Glory-Bee due to her being around longer than Penny and has been known to have dated Goofy. And Penny due to her red hair and nose, which is how Mrs. Geef is described. Neither have been seen recently 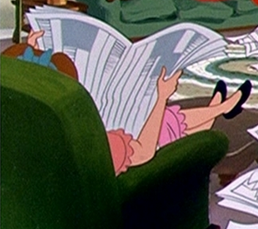 Retrieved from "https://parody.fandom.com/wiki/Mrs.Geef?oldid=878588"
Community content is available under CC-BY-SA unless otherwise noted.