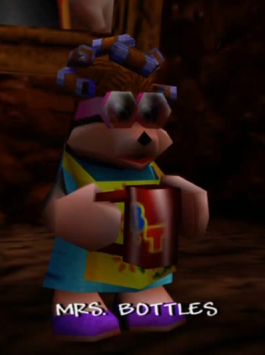 Mrs. Bottles is the wife of Bottles, the mother of Goggles and Speccy, and the sister-in-law of Jamjars. She lives in the mole tunnel underneath Jinjo Village with her family, the entrance of which is found in front of King Jingaling's palace. Banjo refuses to tell her of Bottles' demise at the hands of Grunty, although Kazooie is more than happy to relay this message. Since the two decide against telling her, she states irritably that Bottles is just late to dinner, and deliberately leaves the dinner overdone and forces him to eat it. Afterwards, Bottles tries to explain that he had been killed earlier and just came back to life, with Mrs. Bottles being strongly implied to have not believed him (at least until King Jingaling and Klungo vouched for him after arriving at her place).

In Banjo-Kazooie: Nuts & Bolts, it is mentioned that the trauma of her husband's death and resurrection has caused her and the children to leave him, although this was not mentioned in the game itself, making it a rumour. When Bottles is questioned in Showdown Town, he states that Mrs. Bottles was run over and killed by one of Gruntilda's vehicles, and that she is still living back in Jinjo Village happily. Bottles himself acknowledges the confusion about the conflicting stories, but doesn't bother trying to tell Banjo the truth.

Retrieved from "https://parody.fandom.com/wiki/Mrs._Bottles?oldid=2098182"
Community content is available under CC-BY-SA unless otherwise noted.