The Parody Wiki
Register
Don't have an account?
Sign In
Advertisement
in: Characters, Animals, North American Animals,
and 56 more

The muskrat (Ondatra zibethicus) is a medium-sized semiaquatic rodent native to North America and an introduced species in parts of Europe, Asia, and South America. The muskrat is found in wetlands over a wide range of climates and habitats. It has important effects on the ecology of wetlands, and is a resource of food and fur for humans. Adult muskrats weigh 0.6–2 kg (1.3–4.4 lb), with the body length of 20–35 cm (8–10 in). They are covered with short, thick fur of medium to dark brown color. Their long tails, covered with scales rather than hair, are their chief means of propulsion. Muskrats spend most of their time in the water, and can swim under water for 12 to 17 minutes. They live in families, consisting of a male and female pair and their young. They build nests to protect themselves from cold and predators, often burrowed into the bank with an underwater entrance. Muskrats mainly feed on cattail and other aquatic vegetation, but they also eat small animals. Ondatra zibethicus is the only species in genus Ondatra and tribe ondatrini. It is the largest species in the subfamily Arvicolinae, which includes 142 other species of rodents, mostly voles and lemmings. Muskrats are referred to as "rats" in a general sense because they are medium-sized rodents with an adaptable lifestyle and an omnivorous diet. They are not, however, members of the genus Rattus. They are not closely related to beavers, with which they share habitat and general appearance. 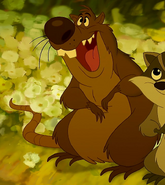 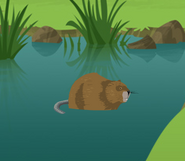