The Parody Wiki
Register
Don't have an account?
Sign In
Advertisement
in: Characters, Animals, African Animals,
and 86 more

The life-history of naked mole rats (Heterocephalus glaber) is astonishingly similar to social insects, with a dominant queen, populating the colony with son and daughter slaves. Naked mole rats can’t control their body temperature internally like other mammals. When cold, they bask underground in chambers close to the surface and when hot, they retreat to lower, cooler areas of the burrow. Naked mole rats front teeth protude through their lips so they can dig without filling their mouth with soil. Naked mole rats have well developed eyes, but their brain has lost the ability to process what they see, leaving them functionally blind. 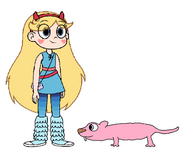