The neck, nicor, nix, nixie, nixy, or nokken (German: Nixe; Dutch: nikker, nekker; Danish: nøkke; Norwegian: nøkken; Swedish: näck; Finnish: näkki; Estonian: näkk) are shapeshifting water spirits in Germanic mythology and folklore who usually appeared in the form of other creatures. Under a variety of names, they were common to the stories of all Germanic peoples, although they are perhaps best known from Scandinavian folklore. The related English knucker was generally depicted as a wyrm or dragon, although more recent versions depict the spirits in other forms. Their sex, bynames, and various transformations vary geographically. The German Nix and his Scandinavian counterparts were male. The German Nixe was a female river mermaid 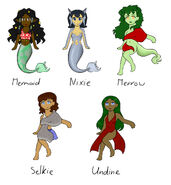 Add a photo to this gallery
Retrieved from "https://parody.fandom.com/wiki/Neck?oldid=1918915"
Community content is available under CC-BY-SA unless otherwise noted.