Leader of the bullies (formerly)

To keep the people under her control.

Captured by the giant pelican and fed to her chicks

"Listen, if you don't keep your end of the bargain, then I can't guarantee your safety. And there are people out there that will take advantage of you. Someone could get hurt."
"You piece of dirt. No, I'm wrong, you're lower than dirt. You're an girl."

Nefaria is the main antagonist of Columbia's 1999 film, The Female's World. She is the leader of the bullies and May's arch-nemesis.

Ruthless and violent, but also cunning, Nefaria thinks nothing of killing people, whom she considers lower than dirt, and her manner of speaking to Prince Richard is reminiscent of an abusive girlfriend mocking her terrified boyfriend. She also beats up her gang members and even presumably kills three of them to keep control of her gang. She dislikes being thought of as weak in any way.

Nefaria is also briefly depicted as a very anxious character. Indeed, during the Mexican bar scene, she expresses her gang the necessity of getting respect and obedience from the people because they are far more numerous than them. She explains one rebel person is enough to cause an entire colony's mutiny (which, ironically, will take place at the end of the movie). It should reveal a huge fear toward people, hidden by her ruthless and dictatorial manners toward people and even her troops.

In any case, Nefaria sees mercy and compassion as weaknesses and relies mostly on fear to maintain control over both her gang and the people. Although, on the contrary, she is slightly compassionate and merciful when she gives the people a second chance to provide food for her and her gang after May accidentally knocks all the food into a puddle.

Nefaria appears to have respect for her father as she did promise her when he died that she would not murder her sister Vincenza and stuck to that promise despite Vincenza irritating her at every turn, proving that for all her cruelty, she is a girl (or person in this case) of her word and this could be seen as her only redeemable quality.

In the film, Nefaria is a feared bully who has lost a piece of hair caused by a past encounter with a bird. She leads her gang of bullies, including her sister Vincenza and a restless, ruthless Darknessa, who keep full control over the people. Nefaria, unlike her gang, does not underestimate the people's strength; she knows that while weaker than the bullies as individuals, the people outnumber her gang a hundred to one.

During Nefaria's first visit to the colony, the gang finds the food supply ruined, so she throws the blame on the people and demands them to gather double the amount she has initially requested by the next season. Later, at their hangout in the desert, Vincenza tells Nefaria about Alexa and Lakira's thoughts that there's no point in returning to Female Island, much to her obvious angry disbelief; after demonstrating an example of the people overpowering them using grain that buries Alexa and Lakira, she explains to the others that the people pose a major threat to them, because they outnumber them considerably, that they'll lose their entire way of life if the people found out about this, and that their sole concern isn't food, but keeping the people in line, which is the reason they are going back. When they return to Female Island, he is dissatisfied with the amount of offering the people give her after a second chance, she usurps the island and plots to kill the King after enough food has been gathered to ensure her dominance over the people. After hearing from Finn about Nefaria's plot, May and the circus troupe return to the island to rescue the King by putting her plan into motion. The circus clowns present their act in front of the bullies to distract Nefaria, who initially orders her henchmen to squish them, but later decides that they can use a little entertainment after seeing Tomira and Trish fight. After Margaret takes the King for a magic trick, Nefaria allows her to, even wanting Darknessa down and gleefully thinking Margaret will saw him in half. When she notices that the king was missing after the act, she interrogates her to tell where he has gone by strangling her, only to be cut off by a fake pelican, that the people have made earlier in the season, which comes down swooping toward her.

Nefaria is initially terrified at the sight of the pelican, due to his fear of pelicans, but soon discovers the bird is fake when Rhonda the Ringmaster helps her by setting it on fire. Nefaria takes Finn hostage again. Furious and embarrassed, Nefaria interrogates the people, including Prince Richard, to find out who is responsible for the ruse. May then confesses that she is the one behind the plot, and Nefaria signals to Darknessa to savagely beat up May until she signals her to stop and asks May why she would do this to her. May reveals her foiled plan to squish the king, horrifying all the people. Nefaria, disappointed about his plan being exposed, muses "I hate it when someone gives away the ending." and signals Darknessa to kick May one last time. Then she declares how dangerous ideas can be and that people are mindless, soil-shoving losers, who have put on this earth to serve the bullies. But then, May manages to stand up to her feet and revolt against Nefaria, revealing that people are not meant to serve bullies and are strong in number. Angered by May's defiance, Nefaria knocks May to the ground. Now it's Nefaria's turn to beat May savagely. Before Nefaria can do so, she is stopped by Richard, who also stands up to Nefaria, much to her amusement.

Inspired by May's speech, the entire colony of people stands up against the bullies. As the colony charges towards Nefaria's gang, they abandon their leader and flee, leaving Nefaria to be seized by the people and trapped in a circus cannon, right at the time when a thunderstorm starts. Nefaria then sees her chance to escape and shoots herself out of the cannon by rolling under Dizzie (who was knocked over by a raindrop) and activates her legs before flying towards May and takes her hostage as she drives away with her in a plan to get revenge on the girl for humiliating her and costing her her control over the colony.

The circus clowns chase after them to try to save May, but they only succeed in pulling off one of Nefaria's hair. However, Richard intervenes and swipes May away from Nefaria, who chases after the two across the stream. She corners May near a pelican's nest (unknown to her) and questions May if she honestly thinks it's over and declares her actions only bought her colony time. May pleads with her and Nefaria tightly grabs her neck, declaring that she will rally more bullies and return next season, but May won't, implying that Nefaria is about to kill her. Before she can, however, at that moment, a pelican (the very same bird that wanted to eat May and the Circus Clowns before) pops out from the nest. Nefaria, however, believing the bird to be another one of May's tricks and that there are little boys inside it, taunts the bird until she shrieks at her, making it very clear that she is real. Now realizing that May has led her straight into a trap, Nefaria screams, and after dropping the girl, tries to flee in terror, but the pelican, however, being faster than her, blocks her path. She snatches her in her beak in one swift move as Nefaria tries to run away and takes her to her nest, where her chicks are. May and Richard hide while watching in horror, as the screaming Nefaria is eaten alive by the pelican's chicks.

At the end of the movie, Tomira and Trish are shown jabbering on about their fight with Nefaria while holding the piece of her hair, which is all that remains of her. 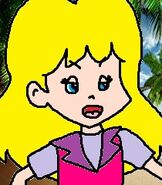 Add a photo to this gallery
Retrieved from "https://parody.fandom.com/wiki/Nefaria?oldid=2067220"
Community content is available under CC-BY-SA unless otherwise noted.