Nellie Brie is a Character from An American Tail 4:Mystery of The Night Monster

Played as Ima GoodLady In The Powerpuff Mice (TV Show)

Played as Sarabi In The Jerry King

She played Princess Atta in A Mouse's Life (my version)

she is a ant 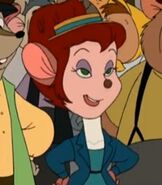 Add a photo to this gallery
Retrieved from "https://parody.fandom.com/wiki/Nellie_Brie?oldid=2349964"
Community content is available under CC-BY-SA unless otherwise noted.