The Parody Wiki
Register
Don't have an account?
Sign In
Advertisement
in: Characters, Animals, Asian Animals,
and 4 more

is named after the distinctive 'clouds' on its coat - ellipses partially edged in black, with the insides a darker colour than the background colour of the pelt. Previously considered to be a single species, the clouded leopard has recently been split into two distinct species, the clouded leopard, Neofelis nebulosa, and Diard’s clouded leopard, Neofelis diardi. Aside from genetic and anatomical differences, this more widely distributed clouded leopard species can be recognised by its lighter, tawny fur and larger cloud-like markings. The limbs and underbelly are marked with large black ovals, and the back of the neck is conspicuously marked with two black bars. The thickly-furred tail is exceptionally long, often equivalent to the body length, and is boldly marked with black rings. Well adapted to forest life, the clouded leopard has stout legs and broad paws which make it excellent at climbing trees and creeping through thick forest. Perhaps the most remarkable feature of clouded leopards is that, in proportion to their body size, they possess the largest canines of all the cats. Indeed, although they are considered to be of an unrelated evolutionary lineage, clouded leopards have independently evolved teeth and jaws that are remarkably similar to the primitive members of the extinct group of sabretoothed cats, such as the eight to ten million year-old, puma-sized Paramachairodus from Europe and Asia. The clouded leopard is an almost monkey like climber and has been observed hanging from branches from its rear feet upside down! As if that wasn't enough the clouded leopard is also a capable swimmer. The clouded leopard is so elusive that most of what is known about its biology comes from captive specimens. The clouded leopard has the longest upper canine teeth relative to skull size of any living carnivore. 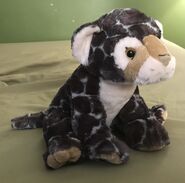