The Parody Wiki
Register
Don't have an account?
Sign In
Advertisement
in: Characters, Animals, Australian Animals,
and 13 more

The New Guinea singing dog or New Guinea Highland dog (Canis lupus hallstromi, Canis dingo hallstromi, or Canis hallstromi), is a type of dog native to the New Guinea Highlands of the island of New Guinea, which lies to the north of Australia. The New Guinea Highlands are divided politically between the nation of Papua New Guinea in the east, and the Papua Province of Indonesia in the west. The dog is noted for its unique vocalization. Some experts have referred to it as a wild dog but others disagree. Little is known about New Guinea singing dogs in the wild and there are only two photographs of wild sightings: one taken in 1989 and published by Australian mammalogist Tim Flannery and one taken in August 2012 by wilderness adventure guide, Tom Hewett in the Star Mountains region of West Papua. In 2016, the New Guinea Highland Wild Dog Foundation announced to the media that it and the University of Papua had located and photographed a group of fifteen "highland wild dogs". 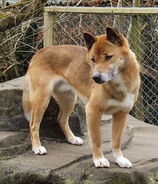