The Parody Wiki
Register
Don't have an account?
Sign In
Advertisement
in: Characters, Pocoyo Characters, Females,
and 5 more

Nina is a character who was first introduced in Season 4 in the episode of the same name, "Nina". She lives in Pato's flower garden with her friends, Roberto and Ladybug.

She greatly loves plants and nature. She naturally speaks mostly a form of gibberish with Japanese or Spanish accent, but can also speak fluent English, though not as much as Pocoyo.

She appears to be very fond of Pocoyo, always play together like siblings. One image shows Nina kissing Pocoyo's cheeks, implying that they have a relationship.

Some of her personal favorites imply that she is younger than Pocoyo, liking soft music and butterflies. She also dislikes pizza.

She is a human girl with red hair and wears a lime green hoodie with two antennae, lime green shorts and shoes. She is slightly shorter than Pocoyo. 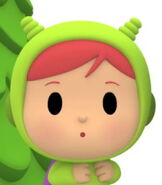