Nina is one of the child characters in Cocomelon, and is part of Melon Patch Elementary's preschool program in which JJ, Cody, Cece, Bella, and Nico are also a part of. She could be seen in the music videos, smiling, playing, laughing, dancing and singing along with the rest of her playmates. She's also Ms.Appleberry's daughter.

Nina is a young child with a tan complexion. She has chocolate brown hair, which has been cut short. Some fringe is tucked in her left ear and is held back with a yellow hairclip in the shape of a bunny. Her eyes are about the same colour as her hair, and her front teeth have appeared to have grown.

Her daily outfit consists of a pair of fun yellow overalls over a white and orange striped shirt. Her overalls have a few print designs patterned on them, including a white figure of a bunny in the front and a carrot print on the left leg. She tops it off with some white socks underneath a pair of lime and pink coloured sneakers. 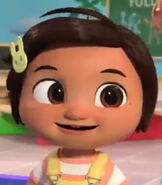 The Stretching and Exercise Song 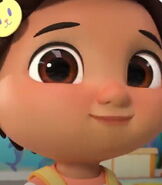 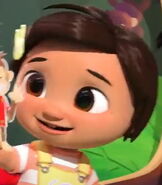 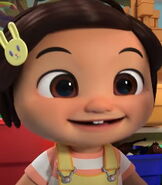 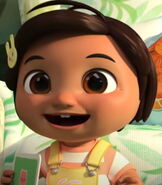