Nina's the young farm girl from Ferdinand (2017). She's voiced by Lily Day in the entire franchise.

Parodies she Stars In

Nina White and the 7 Smurfs

She's Miguel Rivera's 1 true love and the worker at the Dragon Wash.

Beauty and the Werewolf (new version)

She's the village maid and later young princess hero who breaks the curse.

She's a mermaid and later a young human princess who falls in love with Miguel Rivera on dry land.

Miguel Rivera and the Goblet of Fire

She's a servant girl and later a young princess who falls in love with Prince Miguel. 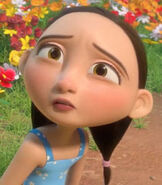 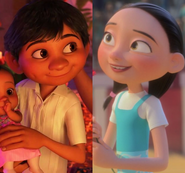 Add a photo to this gallery
Retrieved from "https://parody.fandom.com/wiki/Nina_Lopez?oldid=2100244"
Community content is available under CC-BY-SA unless otherwise noted.