Start a Wiki
Nina Williams is an Irish, cold-blooded assassin that made her first appearance in the original Tekken game and has appeared in every Tekken game ever since. Nina has a lethal fighting style, consisting of throws, grapples, and holds. She has a rivalry with her younger sister, Anna Williams.

During the end of Tekken 2, both Nina and Anna undergo Cryogenic Sleep. They are experimented upon for 15 years (this is the reason why they both remain physically young throughout the tournaments). While in Cryogenic sleep, her ovum was taken without her consent and used to create Steve Fox (who first appears in Tekken 4 and onwards). 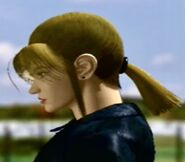 Tekken 3 (1997)
Add a photo to this gallery
Retrieved from "https://parody.fandom.com/wiki/Nina_Williams?oldid=1797340"
Community content is available under CC-BY-SA unless otherwise noted.