The Parody Wiki
Register
Don't have an account?
Sign In
Advertisement
in: Characters, Animals, North American Animals,
and 17 more

The northern shoveler (Anas clypeata), or northern shoveller in British English, sometimes known simply as the shoveler, is a common and widespread duck. It breeds in northern areas of Europe and Asia and across most of North America, wintering in southern Europe, Africa, the Indian subcontinent, Southeast Asia, and Central, and northern South America. It is a rare vagrant to Australia. In North America, it breeds along the southern edge of Hudson Bay and west of this body of water, and as far south as the Great Lakes west to Colorado, Nevada, and Oregon. 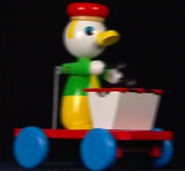