The northern tamandua (Tamandua mexicana) is a species of tamandua, a small anteater in the family Myrmecophagidae. They live in tropical and subtropical forests from southern Mexico, through Central America, and to the edge of the northern Andes. The northern tamandua is a medium-sized anteater with a prehensile tail, small eyes and ears, and a long snout. The fur is pale yellow over most of the body, with a distinctive patch of black fur over the flanks, back, and shoulders, that somewhat resembles a vest in shape. The presence of this colouration pattern makes it possible to distinguish these species from its southern relative, which has a more uniform colour. The tail has fur on its upper surface for about a third of its length, but is otherwise hairless. The hind feet have five toes, while the fore feet have only four. Males and females are similar in size and colour, and range from 102 to 130 centimetres (40 to 51 in) in total length, including the 40 to 68 centimetres (16 to 27 in) tail. Adults weigh between 3.2 to 5.4 kilograms (7.1 to 11.9 lb). Like other anteaters, the northern tamandua is highly adapted to its unusual diet. The tongue is long, extensible, and covered in sticky saliva able to pick up ants and termites. It has unusually well developed muscles, attached to a large hyoid bone and rooted to the top of the sternum. The entire oral cavity is modified to accommodate this tongue, and is so elongated that the back of the soft palate is level with the fifth cervical vertebra near the base of the neck, rather than at the top of the pharynx as in most other mammals. The jaw muscles and mandible are reduced, and the latter is particularly fragile. Like other anteaters, the northern tamandua has no teeth. 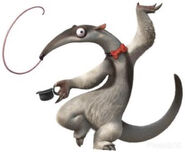