The Parody Wiki
Register
Don't have an account?
Sign In
Advertisement
in: Characters, Animals, Asian Animals,
and 19 more

The northern white-cheeked gibbon (Nomascus leucogenys) is a species of gibbon native to South East Asia. It is closely related to the southern white-cheeked gibbon (Nomascus siki), with which it was previously considered conspecific. The females of the two species are virtually indistinguishable in appearance. The genome of N. leucogenys was sequenced and published in 2011. A "substantial" population of 455 critically endangered northern white-cheeked crested gibbons has been recently found living in the Pù Mát National Park in Nghệ An Province, northern Vietnam, near the border with Laos. Conservation International report they are living at high altitudes, and far from human settlements. This population, representing two-thirds of the total known in Vietnam are, apparently, the "only confirmed viable population" of this variety in the world. 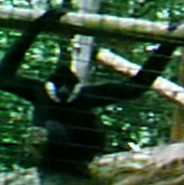