The northern white rhinoceros, or northern square-lipped rhinoceros (Ceratotherium simum cottoni), is one of the two subspecies of the white rhinoceros. Formerly found in several countries in East and Central Africa south of the Sahara, it is listed as Critically Endangered. This subspecies is a grazer in grasslands and savanna woodlands. As of November 2015, there are only three rhinos of this subspecies left. They all belong to the Dvůr Králové Zoo in the Czech Republic but live in the Ol Pejeta Conservancy in Kenya and are protected round-the-clock by armed guards. According to the latest IUCN's assessment from 2011, the subspecies is considered "Critically Endangered (Possibly Extinct in the Wild)". The northern white rhino (formerly ranged over parts of northwestern Uganda, southern South Sudan, the eastern part of Central African Republic, and northeastern Democratic Republic of the Congo. Their range possibly extended as far west as Lake Chad, into Chad and Cameroon. Poachers reduced their population from 500 to 15 in the 1970s and 1980s. From the early 1990s through mid-2003, the population recovered to more than 32 animals. Since mid-2003, poaching had intensified and reduced the wild population. At the beginning of 2015, the fully captive northern white rhino population consisted of only two animals maintained in two zoological institutions: in the United States (San Diego Zoo Safari Park) and the Czech Republic (Dvůr Králové Zoo). However, both of them died later the same year, and no zoo in the world has any northern white rhinos any longer. 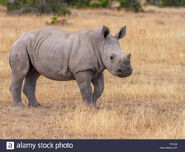 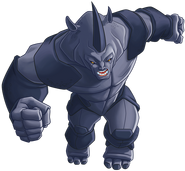