The Parody Wiki
Register
Don't have an account?
Sign In
Advertisement
in: Characters, Animals, Asian Animals,
and 40 more

The Nubian ibex (Capra nubiana) is a desert-dwelling goat species found in mountainous areas of northern and northeast Africa, and the Middle East. Its range is within Algeria, Egypt, Ethiopia, Eritrea, Israel, Jordan, Oman, Saudi Arabia, Sudan, and Yemen. It is extirpated in Lebanon. It is historically considered to be a subspecies of the Alpine ibex (C. ibex), but is increasingly considered a specifically distinct species. The wild population is estimated at 1,200 individuals. Nubian ibexes stand around 65–75 cm (2.1–2.6 ft) tall at the shoulder and weigh around 50 kg (110 lb). They are a light tan color, with a white underbelly; males also have a dark brown stripe down their backs. Nubian ibexes have long, thin horns that extend up and then backwards and down. In males, these reach around 1 m in length, while in females they are much smaller (around 30 cm (12 in)). Nubian ibexes live in rough, dry, mountainous terrain, where they eat mainly grasses and leaves and are preyed upon by leopards, wolves, common foxes, eagles, and bearded vultures. They are social and herds tend to consist of females, young, and males up to the age of about three years. The males are solitary or form more transitory bands of up to eight individuals. During the breeding season, males join the female-based herds for the six- to eight-week rut. Large males then do battle with much clashing of horns. 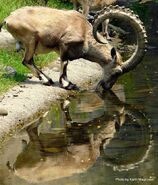 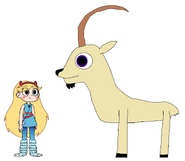 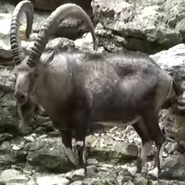 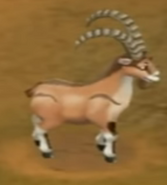 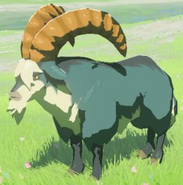