The Parody Wiki
Register
Don't have an account?
Sign In
Advertisement
in: Characters, Animals, African Animals,
and 38 more

Nyala (Tragelaphus angasii) are medium sized in comparison to other antelopes, with a marked size difference between the sexes. Males weigh 98-125 kg and stand over one meter tall at the shoulder, while females weigh 55-68 kg and are slightly less than a meter tall. Males have horns, which can be up to 80 cm long and spiral upwards, curving out at the first turn. Females and juveniles are usually a rusty red color, but adult males become slate gray. Both males and females have a dorsal crest of long hair that runs from the back of the head to the base of the tail, and males additionally have a fringe of long hair along the midline of their chest and belly. Nyala have some white vertical stripes and spots, the pattern of which varies. 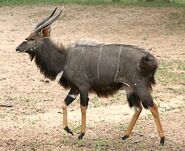 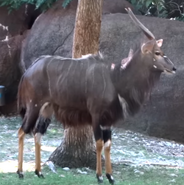 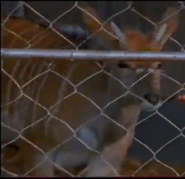