The Parody Wiki
Register
Don't have an account?
Sign In
Advertisement
in: Characters, Animals, Ocean Animals,
and 61 more

Not only is the sunfish (Mola mola) the world’s heaviest bony fish, with some individuals weighing in at a staggering 2.3 tonnes, but it also possesses a truly bizarre body shape, likened to a gigantic ‘swimming head'. The sunfish has no tail, with the caudal fin reduced to a rudder-like structure, called the clavus. The dorsal and anal fins are placed far back on the body, and are used as ‘oars’ in swimming (the fins are flapped synchronously to propel the fish through the water). The sunfish does not have scales, and instead has a tough, elastic skin which is covered in mucus. Also unlike other fish, it has fewer vertebrae, lacks bony tissue in the skeleton, and does not possess ribs, pelvic fins or a swim bladder. The mouth of the sunfish is small, and its teeth are fused together to form a ‘beak’. The sunfish tends to be brownish-blue to silver in colour, often with a slightly iridescent sheen, and it may also exhibit various patterns on the skin. 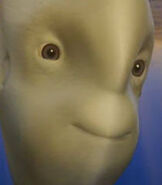 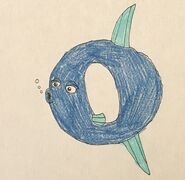 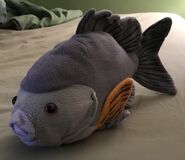 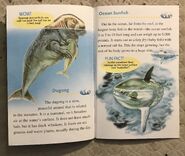