The Tarbosaurus Guard: Return of the Roar

Member of the Tarbosaurus Guard (formerly)

Member of the Night Mesozoic

To protect and defend the Mesozoic Lands

???, violence, things that are sticky, danger, being called "egghead" when he loses his crest feathers, terrible odors, getting dirty

When Oscar becomes vision-impaired after rescuing Bart from falling to his demise, he gives his position to Alice who later joins the Tarbosaurus Guard while he becomes the smartest of the team since the episode "Battle for the Mesozoic Lands". 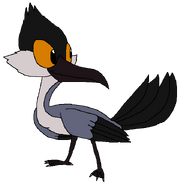 Add a photo to this gallery
Retrieved from "https://parody.fandom.com/wiki/Oscar_(The_Tarbosaurus_Guard)?oldid=2123863"
Community content is available under CC-BY-SA unless otherwise noted.