The Parody Wiki
Register
Don't have an account?
Sign In
Advertisement
in: Characters, Animals, African Animals,
and 63 more

Occurring on every continent except Antarctica, the osprey (Pandion haliaetus) is the one of the most widespread birds of prey. The plumage of the osprey is generally brown above and white below, with a whitish head and a dark stripe through each eye. The wings are long and pointed and the legs are stout and heavily scaled. Also known as the fish hawk, the osprey exhibits several adaptations to hunting and eating fish, including dense, oily plumage, large feet, scaly soles, and a reversible outer toe that helps with carrying fish through the air. The juvenile is fairly similar to the adult but the head is more darkly-streaked and the upperparts appear scaled with cream and pale rufous. The osprey is also called the 'fish hawk', as it is well adapted for hunting fish. A reversible outer toe helps the osprey to carry fish while in flight. Hunting almost exclusively for live fish, the osprey plunges feet first to snatch them from the water, sometimes becoming completely submerged. 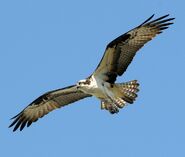 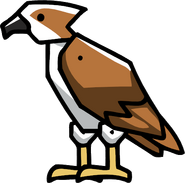 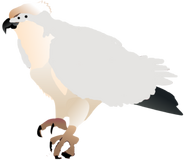 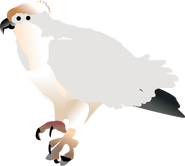 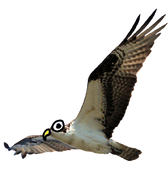